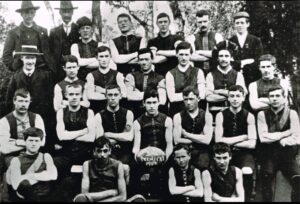 The BFA lasted just one season, with Bellerive Football Club, the ancestor of the current club, the first and only premiers. In 1904 the competition was replaced by the Derwent Football Association which comprised five clubs, including Bellerive. After winning one premiership (in 1907) of that competition Bellerive moved on to the three club Metropolitan Football Association in 1910 where it achieved regular success.

After the Great War Bellerive re-formed but did not play in a formal competition until 1930 when it was a founder member, along with four other clubs, of the South Eastern Football Association. Bellerive won the first three flags in this competition and followed up with further premierships in 1937 and 1940.

The Clarence Football Club is Founded

In 1944 the Bellerive committee resolved to pursue admission to the TFL as a serious option and made the strategically astute decision to alter the club name to Clarence, thereby suggesting an association with the entire Clarence region, of which Bellerive was just a part.

The club was advised in 1946 that the Tasmanian Football League had resolved to admit them from 1947, along with New Norfolk. At Clarence's AGM in November the members agreed to a second name change in two years and the club officially became known as the Clarence District Football Club. After some debate the members decided to adopt the kangaroo emblem, on the grounds that "you never see a kangaroo going backwards".

Clarence finished the 1947 season in 5th place with 3 wins: finals participation was still some way off. In fact, it was not until 1952, with former Sandgroper great Les McClements at the helm, that the Kangaroos finally secured a finals berth - the first of many more to come. 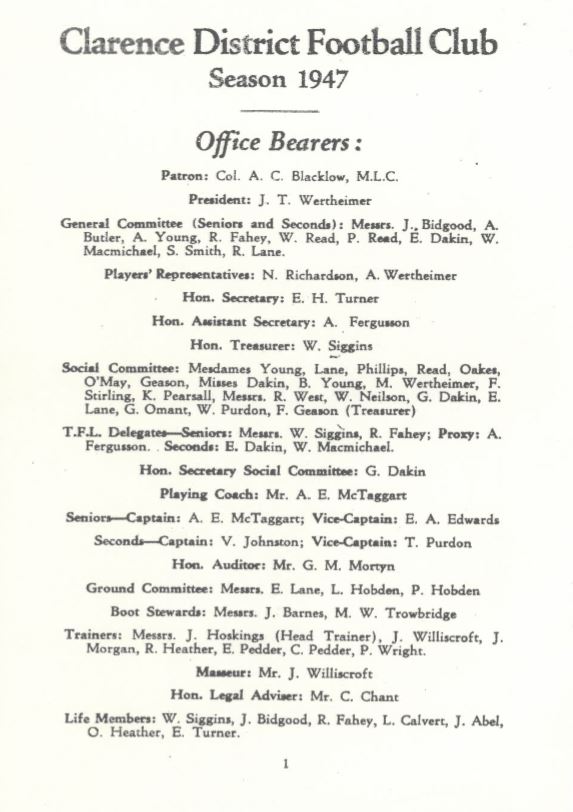 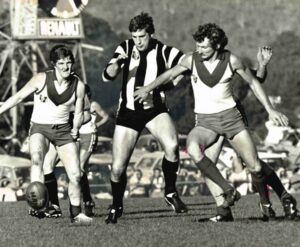 The Golden Era of Tasmanian Football

The watershed year of 1970 began with some shrewd recruiting on the part of the Clarence committee. Four players in particular stood out: Adrian Bowden (ex Sandy Bay and Melbourne), Mike Nash (ex Collingwood reserves), Bob Lynch (ex City-South, Fitzroy and New Norfolk) and Bob Cheek (a 1969 Tasmanian state representative from Penguin). Collectively, if somewhat inanely, termed 'the foreign legion', this quartet would go on to play a significant role in Clarence's rise to pre-eminence, but the real key to the achievement was the coaching of Bingley, who simply refused to accept second best.

After qualifying for the finals in 2nd place, despite a somewhat worrying loss of form over the final few roster matches, Bingley had his charges all but breathing fire for the 2nd semi final encounter with Sandy Bay, which the Roos won comfortably by 22 points. For the grand final against New Norfolk a fortnight later there was an insatiable optimism about the Clarence camp with which the Eagles proved unable to cope. A grand final record crowd of 24,413 saw Clarence secure their first TFL premiership by the score of 19.16 (130) to 10.15 (75).

While the seventies were a golden era for Tasmanian football, Clarence would need to wait until 1979 to return to the grand final where they would meet a Glenorchy team not only heavily favoured to win, but also, in light of the fact that this was to be the great Peter Hudson's final game, a warm sentimental favourite.

An all time TFL record crowd of 24,968 packed into the compact North Hobart Oval creating an electric atmosphere. The Roos rose to the occasion right from the start, and by the long break had established a lead of 16 points. Glenorchy's anticipated 3rd quarter revival coincided with the onset of heavy rain. The last change saw Glenorchy in front by 5 points, before the mighty Roos hit the front and then withstood a withering Magpie onslaught in the final minutes to secure a famous 3 point victory.

A Decade of Dominance

The dawn of the new millennium ushered in a decade of dominance for the club and after winning four premierships in the opening fives years of the decade, respected sports journalist David Stockdale wrote:

"When it comes to premierships, Clarence's cup really does runneth over. The Roos racked up their 12th premiership - the eight since 1993 - by bounding away from New Norfolk to win yesterday's SFL Premier League grand final by 33 points. Given the continual infusion of youth, the bad news for rival clubs, is it is likely

Clarence's run will continue for some time yet".

And indeed it did with three more premierships for a tally of seven within a ten year period.

We were not to know it at the time but the 2010 premiership remains the last time we tasted the ultimate success.  What does 2022 and beyond hold for us?  Come along for the ride - it's going to be a good one. 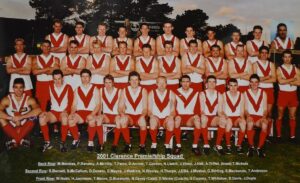 A fantastic resource for those interested in the history of the club can be found at the Pat Hartnett website.